The fourth season of the hit AMC series arriving on Blu-ray in August has been fully detailed.

As previously reported, Entertainment One says 'Hell on Wheels: The Complete Fourth Season' will be coming to Blu-ray on August 18th.

In Season 4 of AMC's top-rated drama, Hell freezes over. Following the brutal winter of 1868, the railroad is at a standstill and restless workers wreak havoc on Cheyenne. Cullen Bohannon is trapped in a fort with a pregnant wife and the Swede. Thomas Durant is broke and Elam Ferguson is presumed dead. The task of uniting America by rail remains undone and the costs and consequences are rising, for everyone.

The Blu-ray will feature 1080p video, a lossless 5.1 soundtrack, and supplements will include: A Look at Season 4, The New Characters of Season 4, Cheyenne Set Tour, Anson Mount Retrospective, On the Set with Colm Meaney, On the Set with Jake Weber, and Episode Featurettes.

You can find the latest specs for 'Hell on Wheels: The Complete Fourth Season' linked from our Blu-ray Release Schedule, where it is indexed under August 18. 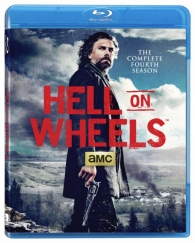