'From Dusk Till Dawn: The Complete Season Two' Blu-ray Bound

The second season of the horror series will sharpen its fangs on Blu-ray in February.

In an early announcement to retailers, Entertainment One is preparing 'From Dusk Till Dawn: The Complete Season Two' for Blu-ray on February 2.

In season two of the supernatural crime saga, core relationships deepen and become more complicated as everyone tries to put their lives back on track after one very insane day. Santánico and Richie (living outside of Houston) are now partners in crime, resembling a more modern version of Bonnie and Clyde; Seth and Kate are scraping by as small time criminals south of the border; and Freddie Gonzalez has an almost obsessive focus on protecting his wife and young daughter in the suburbs. Carlos Madrigal and Scott Fuller emerge from the Titty Twister, changed men. They will all come together once again – this time facing off against an even bigger threat.

You can find the latest specs for 'From Dusk Till Dawn: The Complete Season Two' linked from our Blu-ray Release Schedule, where it's indexed under February 2. 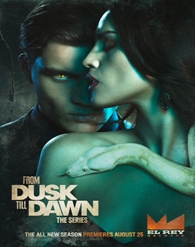 Discs mentioned in this article: (Click for specs and reviews)
From Dusk Till Dawn: The Complete Season Two (Blu-ray)