'From Dusk Till Dawn: The Complete Season Three' Blu-ray Detailed

The third season of the Netflix series planned for Blu-ray in February has now been fully detailed.

As previously reported, Entertainment One is working on 'From Dusk Till Dawn: The Complete Season Three' for Blu-ray on February 7.

The release will feature 1080p video, lossless 5.1 audio, and supplements include: audio commentary with the cast & crew, featurettes including "Season 3 Catch Up," "Inside the Episodes," "Season 3 Best Kills," "Evolution of a Fight Scenes" and much more!

You can find the latest specs for 'From Dusk Till Dawn: The Complete Season Three' linked from our Blu-ray Release Schedule, where it is indexed under February 7. 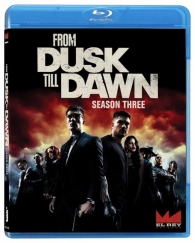