'From Dusk Till Dawn: The Complete Season One' Now Available

The first season of the series based on Robert Rodriguez's vampire film is now available in stores.

As previously reported, Entertainment One will be releasing 'From Dusk Till Dawn: The Complete Season One' on Blu-ray on September 16.

'From Dusk Till Dawn: The Complete Season One is centered around bank robber, Seth Gecko (D.J. Cotrona) and his violent, unpredictable brother, Richard "Richie" Gecko (Zane Holtz), who are wanted by the FBI and Texas Rangers Earl McGraw (Don Johnson) and Freddie Gonzalez (Jesse Garcia) after a bank heist leaves several people dead. While on the run to Mexico, Seth and Richie encounter former pastor Jacob Fuller (Robert Patrick) and his family, whom they take hostage. Using the family RV to cross the border, chaos ensues when the group detours to a strip club that is populated by vampires. They are forced to fight until dawn in order to get out alive.

You can find the latest specs for 'From Dusk Till Dawn: The Complete Season One' linked from our Blu-ray Release Schedule, where it is indexed under September 16. 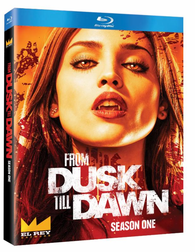