The concert disc is heading to Blu-ray in May.

In an early announcement to retailers, Eagle Rock Entertainment is preparing 'Mika - Sinfonia Pop' for Blu-ray on May 27.

Filmed in the elegant surroundings of the 19th century Teatro Sociale in Como, Italy, this amazing show features MIKA performing all his best-loved songs accompanied by a full orchestra conducted by Simon Leclerc. The show is a perfect fusion of pop and orchestral and includes tracks from his most recent album, the critically acclaimed 'No Place In Heaven', alongside hits from across his hugely successful career. As ever, MIKA is a charming and amiable host and is clearly in his element interacting with the orchestra and conductor Simon Leclerc. This is a magical performance captured in beautiful surroundings and not to be missed.TRACKLISTING1) Overture 2) Underwater 3) Boum Boum Boum 4) Rain 5) Last Party 6) Overrated 7) Any Other World 8) Love You When I'm Drunk 9) Ordinary Man 10) Heroes 11) Toy Boy 12) Grace Kelly 13) Over My Shoulder 14) Good Guys 15) Make You Happy 16) Happy Ending 17) Origin Of Love 18) Relax, Take It Easy 19) Elle Me Dit 20) Love Today 21) Stardust

Specs have not been announced yet, but supplements will include Bonus interview footage with MIKA and Leclerc.

You can find the latest specs for 'Mika - Sinfonia Pop' linked from our Blu-ray Release Schedule, where it's indexed under May 27. 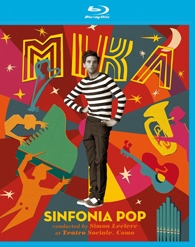