The story of Phil and Don Everly will be told on Blu-ray in September.

In an early announcement to retailers, Eagle Rock is preparing 'The Everly Brothers: Harmonies From Heaven' for Blu-ray on September 9.

Harmonies from Heaven tells the story of the Everly Brothers, Phil and Don, focusing on the heyday of their careers in the fifties and sixties. Featuring new interview footage with surviving brother Don and archive interviews with Phil, it follows their career from child performers on their father's radio show, through their move to Nashville and the their relationship with publishers Acuff-Rose and in particular with the songwriting team of Felice and Boudleaux Bryant who provided many of their early hits, including their first million-seller Bye Bye Love. The film also features interviews with those inspired by the Everly Brothers including Art Garfunkel, Keith Richards, Graham Nash, Dave Edmunds, Tim Rice, Albert Lee, Waddy Wachtel and on into a younger generation with Jake Bugg.

The second disc in the set features a previously unreleased classic live performance from Australian TV, CHEQUERS NIGHTCLUB, SYDNEY from 1968.

Specs have not been announced yet, but supplements will include: Bonus Interviews and Jake Bugg performing Cathy's Clown & Crying In The Rain.

You can find the latest specs for 'The Everly Brothers: Harmonies From Heaven' linked from our Blu-ray Release Schedule, where it's indexed under September 9. 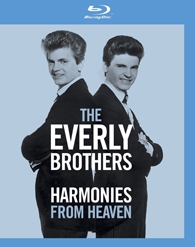 Discs mentioned in this article: (Click for specs and reviews)
The Everly Brothers: Harmonies From Heaven (Blu-ray)