'The Doors: Feast of Friends' Blu-ray Up for Pre-Order!

The rare concert documentary film will debut on Blu-ray in November. You can pre-order the disc here.

In an early announcement to retailers, Eagle Rock Entertainment is preparing 'The Doors: Feast of Friends' for Blu-ray on November 11.

In April of 1968, filming began for what would become the first and only film produced about The Doors, by The Doors. Funded by the band and helmed by friend and fellow film graduate Paul Ferrara, the footage shot for this film would become the well from which the majority of future documentaries and music videos about the band would draw. This film became Feast of Friends, as Paul Ferrara thought it was a great lyric to use for the title. Other than a few appearances in film festivals the following year, an official release would never be seen. Until now.

If not for a poor quality bootleg copy circulated among collectors and eventually via the Internet, the film's existence would have scarcely been known beyond the circle of diehard Doors fans. By many accounts, the original source of that bootleg is thought to have been Morrison's own copy, which he hand-carried when he moved to Paris in 1971 after recording what would be The Doors' final album. Concealed in a paper bag and forgotten at a friend's house, Morrison would never reclaim it, as he passed suddenly a few days later.

'Feast of Friends' offers a cinematic look at The Doors on the road during their summer '68 tour. Whilst never truly completed, as the production funding was abruptly cut due to the band's political problems stemming from Jim's arrest in Miami, the film provides a stylistic approach in true 60's cinéma vérité style. The film is comprised of concert performances which are intercut with fly-on-the-wall footage of the group in their natural habitat - playful, sensitive, chaotic and touching. Other than a few appearances in film festivals in 1968, this is the first official release. Completely restored from the original negative, as supervised by Jim Morrison, the film has been color-corrected and mastered in high definition with the soundtrack totally remixed and remastered by long-time Doors co-producer/engineer Bruce Botnick.

Specs have not been detailed yet, but supplements will include: Feast of Friends: Encore; The Doors Are Open; and The End.

You can find the latest specs for 'The Doors: Feast of Friends' linked from our Blu-ray Release Schedule, where it's indexed under November 11. 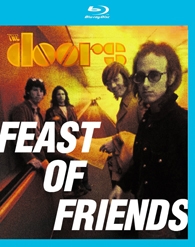 Discs mentioned in this article: (Click for specs and reviews)
The Doors: Feast of Friends (Blu-ray)