'Queen: A Night at the Odeon' SD Blu-ray Dated for November

The legendary Freddie Mercury headlines this concert hitting SD Blu-ray in November. You can pre-order the disc here.

In an early announcement to retailers, Eagle Rock is preparing 'Queen: A Night at the Odeon' for SD Blu-ray on November 20.

This Hammersmith Christmas concert was the culmination of the 26-date 'Queen invite you to A Night At The Opera UK tour of 1975, and was the last show of a very eventful and exciting year for Queen. Queen performed 'Bohemian Rhapsody' for the first time during this tour. Spirits were high within the band for this show; 'Bohemian Rhapsody' was enjoying its fourth week at No. 1 and 'A Night At The Opera' was climbing the album charts on its way to No 1, which it achieved three days after this concert. The show was simulcast live on both BBC Radio 1 and 'The Old Grey Whistle Test' television show on BBC 2; the programmer's host Bob Harris introduced the band on stage.

The Blu-ray will feature upscaled video, a stereo and 5.1 surround-sound audio track, and supplements will include: Looking Back At The Odeon; and Live At The Budokan Japan 1975 1) Now I m Here 2) Killer Queen 3) In The Lap Of The Gods... Revisited.

You can find the latest specs for 'Queen: A Night at the Odeon' linked from our Blu-ray Release Schedule, where it's indexed under November 20. 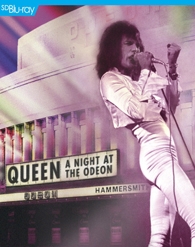 Discs mentioned in this article: (Click for specs and reviews)
Queen: A Night at the Odeon (Blu-ray)