The concert/documentary flick is now available for pre-order.

In an early announcement to retailers, Eagle Rock is preparing 'Nazareth: No Means of Escape' for Blu-ray on October 16.

'No Means Of Escape' combines a live set by Nazareth, filmed before a select audience at London's famous Metropolis Studios, with a documentary 'Made In Scotland', which tells the full story of Nazareth's remarkable career from their formation in 1968, to their breakthrough in the 1970s and right through to their ongoing career in the present day. The concert features hit tracks and album favorites from across the years while the documentary contains classic footage and new interviews with past and present members of the band including now retired lead singer Dan McCafferty.

Specs have not been announced yet, but supplements will include: Acoustic session track "This Flight Tonight" and Additional interviews with Dan McCafferty and Pete Agnew.

You can find the latest specs for 'Nazareth: No Means of Escape' linked from our Blu-ray Release Schedule, where it's indexed under October 16. 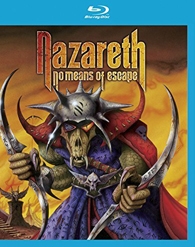 Discs mentioned in this article: (Click for specs and reviews)
Nazareth: No Means of Escape (Blu-ray)