The music film will hit the recording studio on Blu-ray in May, and you can pre-order the disc here.

In an early announcement to retailers, Eagle Rock is preparing 'Lost Songs: The Basement Tapes Continued' for Blu-ray on May 26.

Directed by acclaimed filmmaker Sam Jones (of the Wilco documentary I Am Trying To Break Your Heart), 'Lost Songs: The Basement Tapes Continued' presents the development of a unique project bringing together an extraordinary group of artists to work on previously unknown Bob Dylan lyrics with Grammy-winning producer T Bone Burnett. The film is aimed to accompany the November 2014 Harvest Records album Lost On The River: The New Basement Tapes, and focuses on sixteen sets of lyrics written by Bob Dylan during the legendary The Basement Tapes sessions in 1967, which were only recently rediscovered. Under the auspices of producer T Bone Burnett and with the approval of Bob Dylan, an extraordinary collective of musicians were brought together to set the lyrics to music: Elvis Costello, Rhiannon Giddens, Taylor Goldsmith, Jim James and Marcus Mumford. The film presents an exclusive and intimate look at the making of the Lost On The River album set against the important and historical cultural backdrop of Bob Dylan and The Band's original The Basement Tapes.

Specs have not been detailed yet, but supplements will include Bonus Tracks: "Diamond Ring," "Down On The Bottom," "Hidee Hidee Ho #16," "Kansas City," "Six Months In Kansas City (Liberty Street)," and "The Whistle Is Blowing"

You can find the latest specs for 'Lost Songs: The Basement Tapes Continued' linked from our Blu-ray Release Schedule, where it's indexed under May 26. 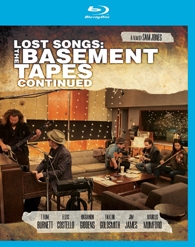