The rock band will hit the stage on Blu-ray in August.

In an early announcement to retailers, Eagle Rock Entertainment is preparing 'KISS Rocks Vegas' for Blu-ray on August 26. The release is listed as an Amazon Exclusive.

In November 2014 a helicopter landed at the infamous Hard Rock Hotel as KISS invaded Las Vegas for an historic nine-show run. Now, fans will be able to own this spectacular deluxe Blu-ray/DVD/2CD for themselves as KISS Rocks Vegas hits stores across the globe. From this blistering live show, fans can expect sky high flames, ear-bursting volume and a few drops of blood! This Deluxe Edition includes the concert on DVD, Blu-ray & CD. The Blu-ray and DVD also includes a KISS acoustic performance as a bonus feature. It also includes an exclusive bonus CD featuring KISS playing acoustically.

Specs have not been detailed yet.

You can find the latest specs for 'KISS Rocks Vegas' linked from our Blu-ray Release Schedule, where it's indexed under August 26. 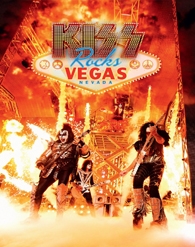