The rock band will hit the stage on Blu-ray in September.

In an early announcement to retailers, Eagle Rock is preparing 'Journey: Live in Manila' for Blu-ray on September 9.

Originally released on DVD in 2009, Journey Live In Manila is now being reissued on DVD and Blu-ray; but for the first time featuring the audio from the show on 2CD. Filmed in 4K utilizing RED technology to deliver extraordinary quality, this release captures Journey's concert at the SM Mall Of Asia in Manila, Phillipines on March 14th, 2009. It marked the return to his hometown of the band's then newly arrived singer and frontman Arnel Pineda. Journey delivered an inspired performance in front of an adoring crowd as they played a set of greatest hits interspersed with tracks from their 2008 album Revelation. This is a must-have for any Journey fan. Line-up is Arnel Pineda (lead vocals); Neal Schon (lead guitar, vocals); Jonathan Cain (keyboards, rhythm guitar, vocals); Ross Valory (bass, vocals); Deen Castronovo (drums, percussion, vocals).

You can find the latest specs for 'Journey: Live in Manila' linked from our Blu-ray Release Schedule, where it's indexed under September 9. 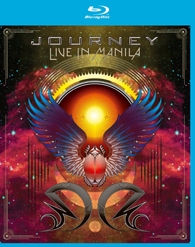 Discs mentioned in this article: (Click for specs and reviews)
Journey: Live in Manila (Blu-ray)