'Fall Out Boy: The Boys of Zummer Tour Live in Chicago' Blu-ray Announced

The rock band will hit the stage on Blu-ray in October.

In an early announcement to retailers, Eagle Rock is preparing 'Fall Out Boy: The Boys of Zummer Tour Live in Chicago' for Blu-ray on October 21.

Join multi-platinum band Fall Out Boy as they travel back to their hometown of Chicago for a mind-blowing audio-visual extravaganza. Featuring their newest hits Centuries, Irresistible, and Uma Thurman, this 17 song concert also includes the band's best loved songs from across their whole career. This special performance is one of the most memorable Fall Out Boy concerts ever, filmed during the Boys of Zummer tour that hit 39 North American cities throughout 2015. Great musicianship, powerful songs and stunning visuals all make for an exceptional concert experience!

Specs have not been detailed yet, but supplements will include three music videos: "Centuries," "Irresistible," and "Uma Thurman."

You can find the latest specs for 'Fall Out Boy: The Boys of Zummer Tour Live in Chicago' linked from our Blu-ray Release Schedule, where it's indexed under October 21. 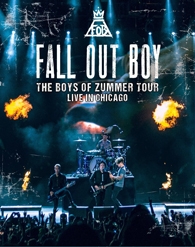 Discs mentioned in this article: (Click for specs and reviews)
Fall Out Boy: The Boys of Zummer Tour Live in Chicago (Blu-ray)