The music documentary is now available for pre-order.

In an early announcement to retailers, Eagle Rock is preparing 'Elliot Smith: Heaven Adores You' for Blu-ray on July 17.

'Heaven Adores You' is an intimate, meditative inquiry into the life and music of Elliott Smith, a musician whose rise to prominence in the 1990s and early 2000s was cut short by his untimely death at the age of 34 in 2003. By threading the music of Elliott Smith through the dense yet often isolating landscapes of the three major cities he lived in: Portland, New York & Los Angeles, 'Heaven Adores You' presents a visual journey and an earnest review of the singer's prolific songwriting and the impact it continues to have on fans, friends and fellow musicians. At the conclusion of the film we have a rich view of an incredible and accomplished talent, a view that places music at the center of Elliott Smith's legacy.

Specs have not been detailed yet, but supplements will include a Performance of 'Heaven Adores You' by Aaron Espinoza and An hour of extended interviews with many of the contributors to the main film.

You can find the latest specs for 'Elliot Smith: Heaven Adores You' linked from our Blu-ray Release Schedule, where it's indexed under July 17. 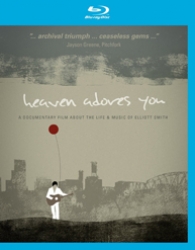 Discs mentioned in this article: (Click for specs and reviews)
Elliot Smith: Heaven Adores You (Blu-ray)