The animated flick is coming to Blu-ray in February.

As previously reported, 20th Century Fox is preparing 'Trolls' for Blu-ray, and now the date has been set for February 7.

From the creators of Shrek comes the most smart, funny, irreverent animated comedy of the year, DreamWorks' Trolls. This holiday season, enter a colorful, wondrous world populated by hilariously unforgettable characters and discover the story of the overly optimistic Trolls, with a constant song on their lips, and the comically pessimistic Bergens, who are only happy when they have trolls in their stomach. Featuring original music from Justin Timberlake, and soon-to-be classic mash-ups of songs from other popular artists, the film stars the voice talents of Anna Kendrick, Justin Timberlake, Russell Brand, James Corden, Kunal Nayyar, Ron Funches, Icona Pop, Gwen Stefani, and many more. DreamWorks' TROLLS is a fresh, broad comedy filled with music, heart and hair-raising adventures. In November of 2016, nothing can prepare you for our new Troll world.

Specs have yet to be revealed, but supplements include: Party Mode - Sing, dance and laugh along with the Trolls in this engaging, interactive feature; PLUS, only on Blu-ray: use your remote to conTROLL fun on-screen moments!; Travel Through Troll Village - Cloud Guy narrates a fun exploration of Troll Village; The Potion for Stop-Motion - Part behind-the-scenes, part stop-motion tutorial, this featurette explores the process of creating Poppy's visually stunning scrapbook; Creating Troll Magic - Trolls Production Designer Kendal Cronkhite-Shaindlin leads a kid-friendly exploration of her role as production designer on the film before highlighting four key stages of creating the animation with detailed visuals of each stage; Troll 2 Troll - Poppy and Branch have a friendly debate on important topics such as “Cat vs. Dog.”; Inside the Bunker - An in-depth exploration of Branch's "special" place, narrated by Cloud Guy; and Deleted Scenes with Intros by Director, Mike Mitchell and Co-Director, Walt Dohrn.

You can find the latest specs for 'Trolls' linked from our Blu-ray Release Schedule, where it's indexed under February 7. 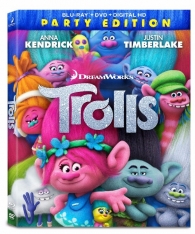