The third film in the animated franchise arrives on Blu-ray in June.

In an early announcement to retailers, DreamWorks will be releasing 'Kung Fu Panda 3: Awesome Edition' on Blu-ray on June 28.

After reuniting with his long-lost father, Po travels to a secret village and meets tons of hilarious new panda friends and family members. But when the supernatural villain Kai challenges all the Kung Fu masters across China, Po must discover the teacher within himself and train his clumsy brethren to become the ultimate band of Kung Fu Pandas!

Specs have yet to be revealed, but supplements include: Everybody Loves a Panda Party – Join Po and the entire cast of lovable pandas to sing-along and learn why everybody loves a panda party in this all-new presentation; Po’s Posters of Awesomeness – Po leads a deeper exploration of the awesome art in Mr. Ping’s hut as the posters come to life and illustrate his hilarious stories; Panda Paws – Watch the enormously talented panda ribbon dancer Mei Mei starring with Bao in an exclusive animated tale; Make a Panda Party Paper Pal – Learn the mystic art of paper folding and create a village of panda pals as Po hosts this fun and entertaining tutorial; Play Like a Panda – Adorable overload! Learn all about real baby pandas, their amazing lives, and their remarkable playful ways; The Origin of “Skadoosh” – For the first time ever, Po reveals the extra-super-secret origin of his world-famous catchphrase; and Faux Paws Deleted Scenes – Discover fascinating story insights with this revealing collection of deleted footage you couldn’t see in theaters!

You can find the latest specs for 'Kung Fu Panda 3: Awesome Edition' linked from our Blu-ray Release Schedule, where is indexed under June 28. 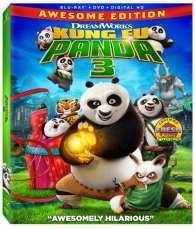