The animated comedy is now available for preorder on both formats at Amazon.

As previously reported, DreamWorks is set to release 'Captain Underpants: The First Epic Movie' on Blu-ray and Ultra HD Blu-ray later this year, and now the date has been set for September 12th.

You can find the latest specs for 'Captain Underpants: The First Epic Movie' linked from our Blu-ray Release Schedule, where it is indexed under September 12. 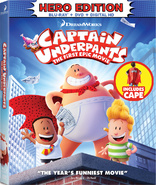 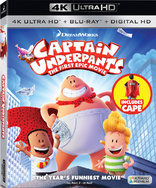