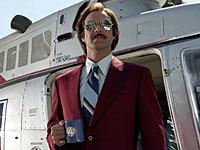 'Anchorman' to Bow on HD DVD this November

DreamWorks Home Entertainment has announced it will bring the Will Ferrell comedy 'Anchorman: The Legend of Ron Burgundy' to HD DVD in time for the holidays.

Though not the out-of-the-gate smash most of Ferrell's more recent comedies have been (such as the $100 million-plus grossers 'Talladega Nights' and 'Blades of Glory'), 'Anchorman' has found a large fanbase on video -- one that's almost sure to eat it up once again as it hits high-def.

DreamWorks has announced a retail date of November 27 for the HD DVD, joining another just-announced Ferrell comedy, 'Old School.'

The studio has not yet unveiled supplement plans for this high-def edition of 'Anchorman,' however the disc is set to feature the unrated version originally seen on DVD, and is expected to include both Dolby TrueHD and standard Dolby Digital-Plus 5.1 surround tracks.

We've added a new listing for 'Anchorman' to our HD DVD Release Schedule, where it joins 'Old School' under November 27. Stay tuned for full details and box art to be revealed in the coming days.