Guardians of the Galaxy Vol. 2 in Dolby Cinema

Last week, I had the extraordinary privilege of attending the Guardians of the Galaxy Vol. 2 world premiere at The Dolby Theatre in Hollywood, CA. As I've written before, Hollywood premieres are a unique because they are a few hours where the magic of Hollywood, rather than the often mundane business aspects, shine brightest. There are screaming fans, stars on the red (or in this case purple) carpet, free concessions, and a cavernous auditorium where filmmakers, performers, and craftsmen also gather for the Academy Awards.

On top of all of this generally good buzz, we had a ginormous laser Dolby Vision projection system with its 1,000,000:1 contrast ratio with one of the most expansive Dolby Atmos configurations in the world. So technically, The Dolby Theatre isn't a true Dolby Cinema (or Dolby Cinema at AMC), but for you to experience the movie like I did, you'll need to see out the Dolby Cinema format.

With the original Guardians of the Galaxy -- heretofore known has Vol. 1 -- director/co-writer James Gunn and his creative collaborators put a fresh spin on the comic book and space opera genres. Fusing together meta-comedy, a band of rogues, '70s rock music, a neon color palette, and a unique tonal balance, the filmmakers arguably produced one of Marvel's best pictures in its growing canon.

This week sees the release of Guardians Vol. 2, which is a rare comedy sequel -- like 22 Jump Street -- that stands shoulder to shoulder with its predecessor. I'll leave our full in-depth review to Phil Brown over in the Bonus View, but, for me, Vol. 2 feels as fresh as the original while simultaneously giving you a heaping serving of the elements that worked so well the first trip 'round the galaxy. Much of this is due to the way Gunn and team give the story time to breathe. In place of the now-standard bloated, overly plotted "turn off your brain" blockbuster, Vol. 2 focus on its characters and thematics, pairing people (and aliens) off to deal with their fears and flaws... all while making the audience laugh themselves silly and -- somehow -- feel a genuine connection to main, CGI, and secondary characters alike. (#BabyGroot4Ever)

In other words, if you enjoyed Vol. 1, get your walkman ready because Vol. 2 is gonna be on repeat for a long time. 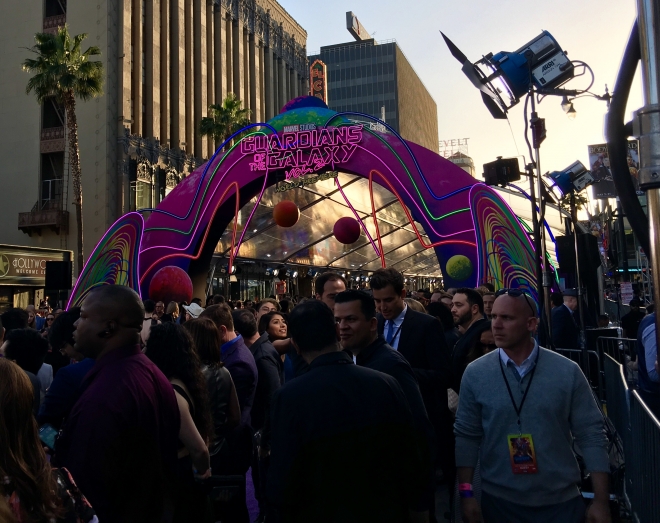 You know how there are movies like Gravity or The Jungle Book that define a premium technology? Guardians of the Galaxy Vol. 2 is the single most vibrant and resplendent Dolby Vision title to date.

Not only are there moments where the screen simply vanishes, plunging the auditorium into darkness, but I'm fairly certain there are extended sequences that feel like they've been graded to the wider Rec.2020 color space (I'll make sure to update this when I confirm). If that's true, it's only the fourth production to do so since Pixar's Inside Out. (the sub-conscience scene) & The Good Dinosaur (the bad fruit scene), and the entirety of The LEGO Batman Movie. If I'm wrong, then this is one of the most visually stunning uses of the DCI P3 color space I've ever seen. 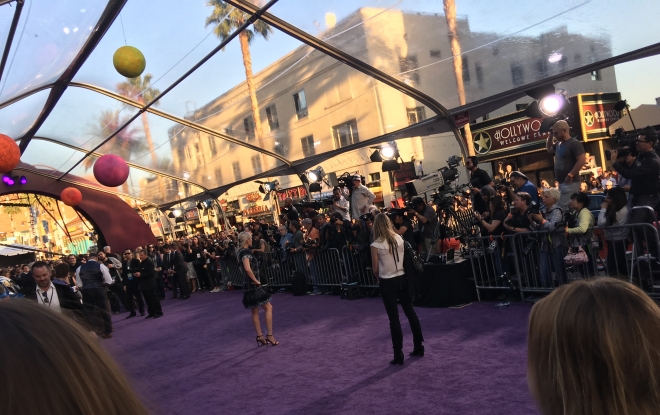 My comments must sound like hyperbole -- and, make no mistake, the tech geek in me is genuinely excited -- but, sincerely, this movie is a visual stunner. Play close attention to the fauna of Kurt Russel's planet, or to the exotic worlds and planets visited as Rocket space-jumps between them all, or to what's best described as celestial fireworks near the film's final moments. I very much enjoyed the movie along, but couldn't help but sit back at least once a scene to marvel at all the digital artistry on display. Jaw... dropped.

Since Disney has yet to support Dolby Vision or HDR10 in the home entertainment landscape, if you get a chance to see Vol. 2 in a Dolby Cinema, take it. It's quite honestly the best HDR/WCG I've ever seen, sitting next to Pacific Rim for pure eye-candy glory.

Let's just hope we get to take this one home someday.

[4/26/17 RUMOR UPDATE: there are rumors going around saying James Gunn was SO impressed by releasing Vol. 2 in Dolby Vision and Atmos that he's pushing Disney to release this movie on Ultra HD Blu-ray with both technologies. So will Guardians Vol. 2 be The Very First Disney UHD title??? Gosh, I have no idea, but I sure hope so.] 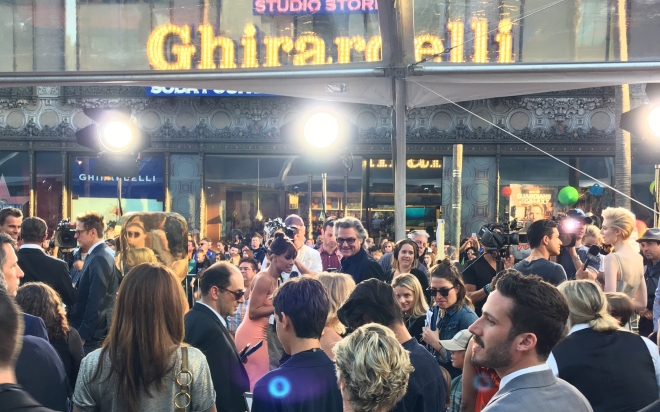 While Vol. 2 doesn't define Dolby Atmos in the same way Mad Mad Fury Road or Gravity did, the latest Marvel adventure uses the object-based surround format in consistently engaging ways, proving filmmakers are thinking about sound mixes as Atmos-first rather than multi-channel affairs that get an Atmos upgrade.

Vol. 2 in Dolby Atmos offers an ultra dynamic and immersive aural experience that surround geeks will be drooling over. Dialog is spectacularly clear, even when characters are off screen -- there's a terrific demo moment where Chris Pratt is trying to find tape, his voice bouncing around up and down and behind the audience left ear. LFE levels are also on point, providing heart-pounding heft to gunfire, explosions, and crashing ships. The classic rock tracks have never sounded this clear. And the effects themselves range from whole room immersion down to, as describe above, smaller little Atmos moments.

I wasn't in the Dolby Theater's sweet spot, but from where I was sitting, the whole thing was impressively technical but never exhausting. I look forward to revisiting it from my favorite dead-center seating in the next week or two. 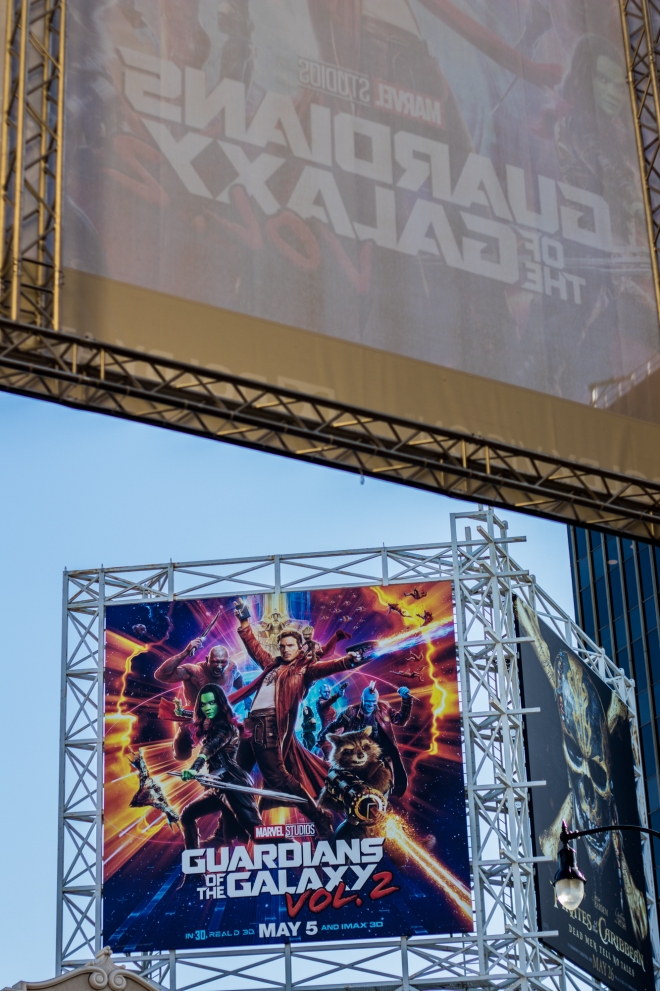 Guardians of the Galaxy Vol. 2 is a fun and fantastic example of how modern blockbusters can be clever and dramatic and laugh-out-loud funny all while delivering compelling character arcs and thrilling action set-pieces. In other words, you need not turn off your brain to enjoy this one, but you'll probably want to check out Vol. 1 to get the most out of Vol. 2.

Even if the movie weren't enough to warrant a recommendation all on its own, Vol. 2 features one of the most jaw-droppingly beautiful Dolby Vision HDR wide color gamut gradings I've ever seen, right up there with Pacific Rim, The Jungle Book, and Inside Out (which featured one scene in Rec.2020). In all my years of cinema-going, I've never seen colors as vibrant. The Dolby Atmos mix is also brimming with immersive spectacle and quieter moments making use of pinpoint precision.

There will be many fantastic ways to see Guardians of the Galaxy Vol. 2 when it opens May 5th (well, May 4th the night before), but there won't be a truer way to experience it than a Dolby Cinema. I know I'll be going again and I hope to see you there too.

To find a Dolby Cinema at AMC location near you, click HERE. Thanks again to everyone at Dolby for such an amazing night. 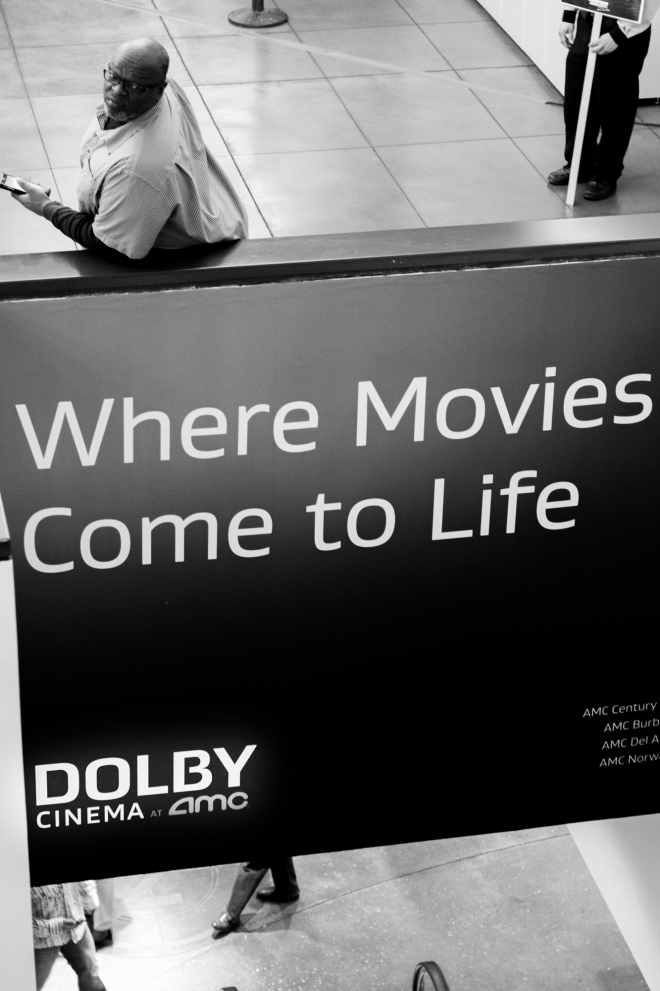