Wednesday night, Dolby hosted an advanced screening of 'Batman v Superman: Dawn of Justice' at The Vine, its Dolby Cinema Prototype Lab in Hollywood, CA. You can read about our first visit HERE, but The Vine has been used for the last three years to pitch Dolby Cinema to exhibition partners and filmmakers, showcasing Dolby Vision high dynamic range projected through a proprietary dual-4K laser projection system developed with Christie, and the enveloping, hemispherical surround system known as Dolby Atmos.

I'll leave the movie review to HDD's Phillip Brown -- he gave it 2.5 stars and you can read said review HERE -- but I think it's safe to say 'BvS' is a very similar experience to 'Man of Steel'. If you enjoyed the tonal qualities and visual styling of that production, you're likely to do the same here. If not, perhaps you might want to wait for home video. That said, I dug Ben Afleck in the Batman roll and can't wait to see what Gal Gadot does in her stand-alone 'Wonder Woman' feature.

Regardless of how any of us feel about this particular movie, there's one thing I do know -- if you're planning to see 'BvS' this weekend, you'd be doing yourself a huge favor by finding a Dolby Cinema (for our western European readers) or Dolby Cinema at AMC Prime (for our US readers) auditorium because you're going to get an unmatched cinematic experience.

How so? Let's break it down.

Dolby Vision is, from my perspective, two coexisting technologies.

First, it's 12-bit, high dynamic range grading system capable of both the DCI P3 and Rec.2020 color spaces. Dolby Vision, albiet at 10-bits, is also available in the home via streaming services such as VUDU and Netflix when watching on displays like the new VIZIO P-Series.

Dolby Vision means, to audiences, more steps of latitude between the darkest darks and the brightest brights. In a very effective demonstration, Dolby projects a white dot on a black background. In the standard 2,000:1 contrast ratio, the screen is, at best, grey. When the Dolby Vision projector flips to its native 1,000,000:1 contrast ratio, the white dot brightens as screen vanishes into blackness, and you can hear the audible gasp from folks who have never seen this.

'Batman v Superman: Dawn of Justice' is, as we'd expect, exceptionally dark (at times), and benefits greatly from enhanced black levels. I haven't been able to see the entire film in standard color grading, but we were treated to a taped introduction by director Zack Snyder NOT in Dolby Vision with clips from the movie. I noted a shot of a police cruiser fish-tailing to a stop outside a building. I believe it's in the trailer. A minor moment in a movie about dueling superheroes, but dramatic for demonstrating Dolby Vision's superiority. In DV, the police car is true black, as is the asphalt, while the police car's flashing light colors are richer, and there's tons of extra detail in the shadows and highlights.

Now take that dramatic, two-second upgrade, and apply it over an entire film, much of which is drenched in darkness and pouring rain during its most dramatic moments. The various Bat Suits are a wonder in Dolby Vision -- so clear despite black fabric in and out of shadows. Everything the filmmakers want us to see is visible; Synder described this edition as seeing "the real version."

In terms of flaws, I was surprised at studio logo backgrounds that were not pure-black, a few places where crush seemed a little excessive, and how little detail was visible in some explosions and laser beams. But most of that seems to be filmmaker intention rather than anything having to do with technological limitations.

'BvS' is not my favorite Dolby Vision film -- it has a pretty muted color palette -- but it is at times gorgeous and should offer black-level demo material in home cinemas. 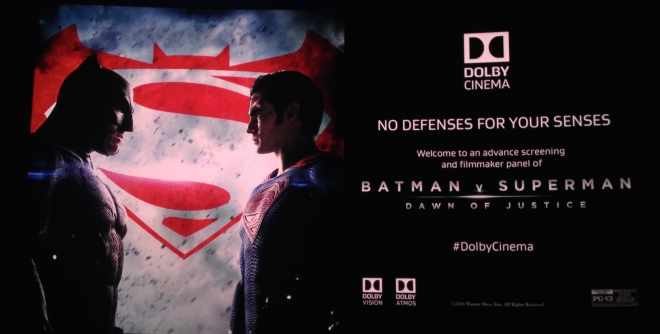 The Vine Dolby Cinema Prototype offers a state-of-the-art Dolby Atmos system with Christie Vive Speakers -- 28 surrounds, two overhead rows, five behind-the-screen channels, plus behind-the-screen subs and in-wall bass management. Dolby Atmos, as many of you know, is an object-based, rather than channel-based, sound mixing format that creates whole-hemisphere immersion in many different speaker configurations. It's also available in the home, giving consumers the option to install in-ceiling speakers, bounce sound off a ceiling with special Dolby Atmos speakers, or even via space-saving soundbars.

'Batman v Superman' is a very bombastic movie. As the opening few sequences played out -- one that retells the 'Man of Steel' climax from Bruce Wayne's POV is a real stunner -- I was convinced 'Mad Max Fury Road' was about to be dethroned as the format's best offering. And while there's a lot of skill going into this often-impressive mix, after two and half hours, my ears were fatigued. I've had the fortune of talking with Scott Wilkison from AVSForum at many Dolby events now, and he has said Christie Vive speakers are a little bright for his ears. I didn't necessarily agree when seeing 'The Martian' or 'The Revenant', but felt that sensation on this mix which is not just complex, but loud for what feels like 90% of the running time. Even smaller moments ramp up to full bombast, creating an overall DRONING sensation. And I adore Hans Zimmer -- I'm listening to the soundtrack right now -- but with all the layers upon layers, it was too much for my ears.

Despite my qualms about overall volume and the mix's tendency to drone, I would like to compliment what works very well. Dolby Atmos fans get tons of overhead and surround immersion from explosions to helicopters and flying men and various Bat Vehicles. And Hans Zimmer's score has elements everywhere, while LFE punches during fight sequences (and orchestral drums). It's a detailed mix. A precise mix. It was just a little too much for me, at least at these volumes on this particular speakers. AMC tends to use JBL for their Dolby Cinema locations, which might have a different effect.

That said, I'd definitely be open to revising this Dolby Atmos mix in the home -- I can only imagine this amount of detail and aggression on KEF R-Series or Klipsch Reference Premiere Series speakers -- in a 7.2.4 configuration -- where I can tailor the experience to preferred volume levels. 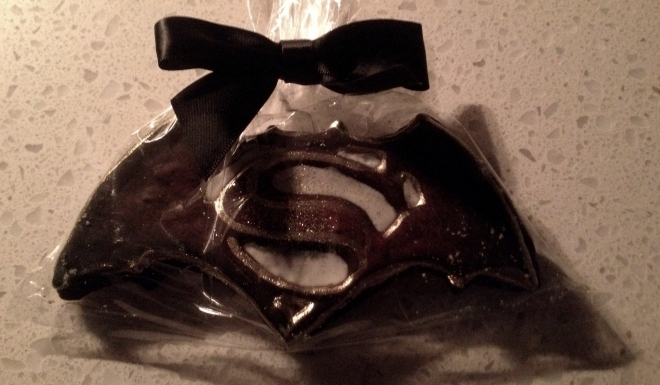 'Batman v Superman: Dawn of Justice' has descended upon the Earth this week, driving eager fans and curious cinema goers to theaters all over the world. Whether you enjoy the movie is up to your personal tastes, but if you want to see the "real version of the film", or even if you want to forget the world for a couple hours and slip into stunning, absolute darkness with the excellent picture and bombastic sound, you're doing yourself a favor in seeking out a Dolby Cinema or Dolby Cinema at AMC Prime auditorium capable of projecting the movie in Dolby Vision with Dolby Atmos sound.

Oh, and if you've already gotten a chance to see 'BvS' already, keep things spoiler-free, but please hit up the forums or comments below to chat about the film's picture and audio qualities. I'd love to hear from anyone catching Dolby Vision or Dolby Atmos for the first time. Or hear about other ways you've enjoyed this and other first-run releases, especially if you see the movie in multiple formats. Cheers.