Check out Dolby's interview with the audio director for the Oscars broadcast.

Dolby has conducted a post-show interview with Paul Sandweiss, the audio director for the 2017 Academy Awards broadcast. Throughout the Dolby Lab Notes piece, Sandweiss addresses his work during the show and how his team went about managing the infamous Best Picture mix-up in real-time.

Along with his team, Sandweiss was in charge of mixing all of the ceremony's sound elements in The Dolby Theatre before they got to viewers' TVs in Dolby Audio 5.1 surround sound. This includes being responsible for watching who was going where, what cameras were being broadcast, and what microphones should be live in order to mix speeches from the podium, audience responses, video packages, music, and other relevant effects in real time.

Check out a 360-degree video of the Oscars mixing truck in action below.

On the subject of the unexpected (and much talked about) Best Picture snafu, Sandweiss told Dolby, "I personally have never seen anything like this happen. We were just trying to get off of the air on time [before the mix-up occurred]. We're trying to focus, and everybody is trying to finish the show. Then, we received word from our lead stage manager that something needed to be fixed. At that point, you're sort of flying in the dark; none of us knew what was going to happen. We just had to get it right."

Click here to check out the full interview. And here's a few more tidbits about the Oscars broadcast sound mixing process per Dolby:

- The broadcast signal travels from The Dolby Theatre in Los Angeles to ABC’s New York mothership, and then to a small army of satellites hovering 22,300 miles above the Earth.

- It’s estimated that several hundred million people in over 200 countries watched the telecast.

- The night of the show, a team of top sound mixers manage the sound to ensure that those watching at home have the very best sound experience.

- 2017 marks the 16th year that Dolby engineers have been present to help ensure quality sound for every broadcast of the Academy Awards show.

- Dolby’s assistance in the Dolby Audio surround sound broadcast of the Academy Awards started in 2002 in the home of the Oscars, which was renamed The Dolby Theatre (formerly named the Kodak Theater) in 2013. (The Oscars were first broadcast HD and 5.1 in 2002). 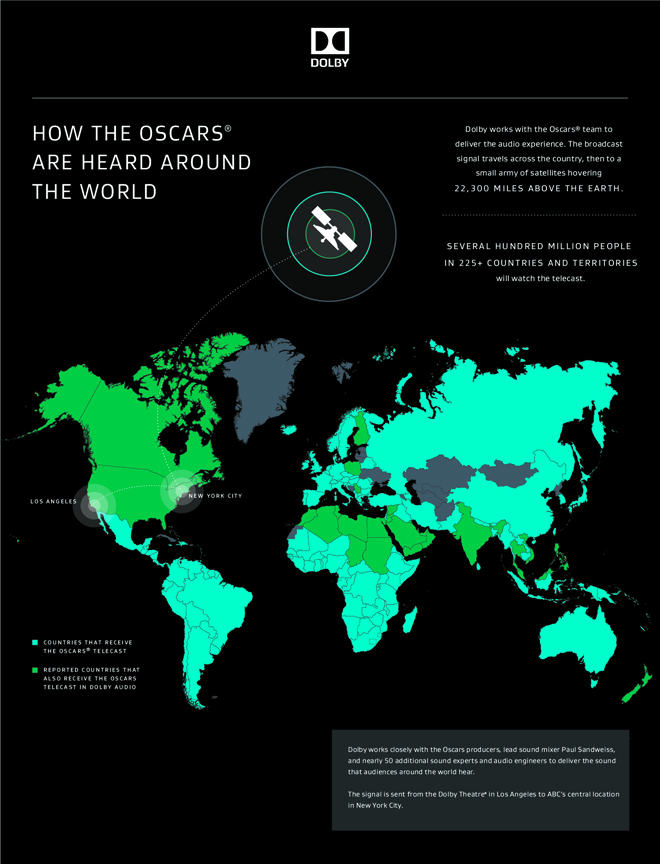