The company has announced new milestones with their Atmos audio and 3D projection technologies.

As part of the 2014 CinemaCon being held in Las Vegas this week, Dolby will be highlighting it latest innovations and achievements, including the expansion of its Atmos audio tech and the advancement of its Dolby 3D process for laser projectors.

On the visual side of things, Barco and Christie Digital will be demoing their laser projectors using Dolby 3D. Since laser projectors are capable of rendering brighter images with higher contrast ratios than traditional projectors, they are a perfect match for Dolby's 3D process which uses advanced color separation technology. Coupled with laser projection, Dolby 3D can preserve about 90 percent of the light that reaches audiences from the projector.

Moving on to audio, Dolby has revealed several exciting updates related to its Atmos technology. After making its debut in April 2012, Dolby Atmos has been enthusiastically adopted by many Hollywood studios, directors, and theaters, and now its presence is expanding to even more screens and film projects. The object-based surround sound process gives "filmmakers the creative freedom to easily place or move sounds anywhere in the movie theatre." Dolby has announced that a new exhibitor called Cinemaxx will be installing Atmos into 100 screens throughout Indonesia. This latest expansion will bring the total number of Dolby Atmos screens to nearly 600 worldwide.

“Dolby looks forward to working with Cinemaxx to bring the ultimate cinematic experience to moviegoers in Indonesia,” said Mahesh Sundaram, Vice President, Asia Pacific, Dolby Laboratories. “With Dolby Atmos, you feel as if you are in the movie, not merely watching it. We are confident that moviegoers will go back again and again to Cinemaxx once they enjoy their first Dolby Atmos film.”

In addition to the continued expansion of Atmos equipped theaters, Dolby has also announced a new slate of films that will use the technology in their sound mixes. The upcoming releases include: 'Million Dollar Arm,' 'Captain America: The Winter Soldier,' 'Guardians of the Galaxy,' 'The Avengers: Age of Ultron,' 'The Expendables 3,' 'Noah,' 'Transformers: Age of Extinction,' 'How to Train Your Dragon 2,' 'Edge of Tomorrow,' 'The Hobbit: There and Back Again,' and 'Transcendence.' With these eleven new titles, there are now over 100 films that use the Atmos process. 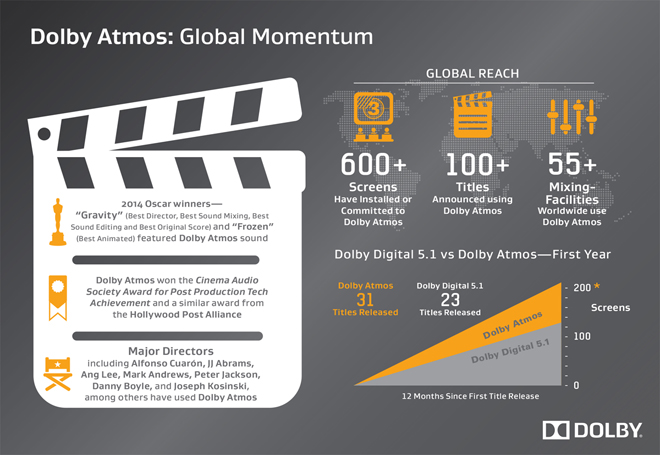 Dolby will be conducting special demos, screenings, and panel discussions throughout the week at CinemaCon 2014 in Las Vegas. To find an Atmos screen near you, click here.