As previously reported, Game of Thrones creators David Benioff and D. B. Weiss have been hired to develop new Star Wars movies, and now Disney's CEO, Bob Iger, has confirmed that their project will be the next Star Wars film released following the debut of The Rise of Skywalker.

Though plot details have not been announced, Benioff and Weiss' film is expected to tell a story separate from the main Skywalker saga. Based on Disney's recently revealed schedule for upcoming Star Wars films, the currently untitled movie is set to premiere on December 16, 2022. Likewise, Disney also announced plans to release additional Star Wars films on December 20, 2024 and December 18, 2026, but it's unclear if Benioff and Weiss are also involved in those entries. 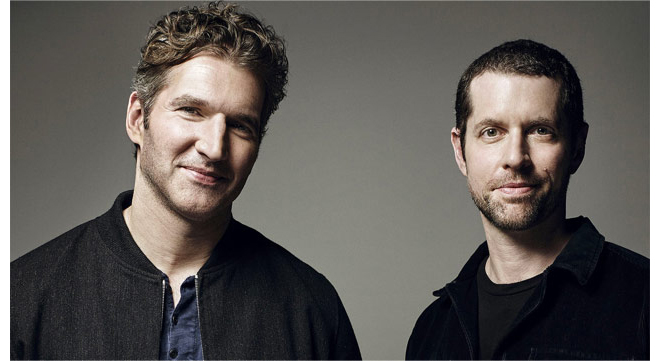 David Benioff and D. B. Weiss are best known as the creators and showrunners of HBO's Game of Thrones. The show is based on the Song of Ice and Fire book series written by George R. R. Martin. Game of Thrones first premiered in 2011 and the show's series finale is set to air on May 19, 2019.

Beyond the new film from Benioff and Weiss, other upcoming entries in the Star Wars franchise include Star Wars: The Rise of Skywalker from director J. J. Abrams on December 20, 2019. In addition, filmmaker Rian Johnson is also developing an entirely new trilogy of new Star Wars films as well. Meanwhile, three Star Wars streaming shows are set to arrive on the upcoming Disney+ streaming service, including The Mandalorian, a Rogue One spinoff series focused on the character of Cassian Andor, and a currently undisclosed show.