The animated Pixar sequel is headed to both formats this November.

In an early announcement to retailers, Disney and Pixar is set to release 'Finding Dory' on Blu-ray and 'Blu-ray 3D' on November 15.

From the Academy Award(R)-winning creators of Disney-Pixar's FINDING NEMO (Best Animated Feature, 2003) comes an epic undersea adventure filled with imagination, humor and heart. When Dory, the forgetful blue tang (Ellen DeGeneres), suddenly remembers she has a family who may be looking for her, she, Marlin (Albert Brooks) and Nemo (Hayden Rolence) take off on a life-changing quest to find them... with help from Hank, a cantankerous octopus; Bailey, a beluga whale who's convinced his biological sonar skills are on the fritz; and Destiny, a nearsighted whale shark! Bring home the movie overflowing with unforgettable characters, dazzling animation and delightful bonus extras!

Each combo pack will feature a lossless 7.1 soundtrack and supplements include: Theatrical Short: "Piper" – A hungry sandpiper hatchling ventures from her nest for the first time to dig for food by the shoreline. The only problem is that the food is buried beneath the sand where scary waves roll up onto the shore; Marine Life Interviews (All-New Mini Short) – Meet the inhabitants of the Marine Life Institute as they remember our favorite blue tang; The Octopus That Nearly Broke Pixar – Pixar's "Team Hank" unravels the challenges, frustrations, and rewards of bringing to life the studio's crankiest and most technically complicated character ever; What Were We Talking About? – This piece showcases the complex routes Dory's story took as the filmmakers worked to construct a comprehensive narrative involving a main character with short-term memory loss; Casual Carpool – What's it like to commute with the voices of Marlin, Charlie, Bailey and Hank? Join "Finding Dory" writer/director Andrew Stanton as he drives Albert Brooks, Eugene Levy, Ty Burrell and Ed O'Neill to work; Animation & Acting – How do you create a connection between a human audience and a fish? This behind-the-scenes look behind the curtain examines the process of constructing believable performances through a unique collaboration between the director, voice actors and animators; Creature Features – The cast of "Finding Dory" share cool facts about the creatures they voice in the film; Deep in the Kelp – Disney Channel's Jenna Ortega guides us on a research trip to the Monterey Bay Aquarium to show how far the "Finding Dory" crew went to make Dory's world feel real; Skating & Sketching with Jason Deamer – "Finding Dory" character art director Jason Deamer talks about how he got to Pixar, how he draws the characters in the film, and how falling off a skateboard teaches you lessons you can use in art and life; Dory's Theme – A spirited discussion among the composer, music editor and director of "Finding Dory" about the musical elements that shape Dory's quirky and joyful theme; Rough Day on the Reef – Sometimes computers make mistakes. Here you'll see some of the funny, creepy and just plain bizarre footage the crew encountered while making "Finding Dory"; Audio Commentary – Director Andrew Stanton, co-director Angus MacLane and producer Lindsey Collins deliver their personal perspective on "Finding Dory"; and Deleted Scenes (introduced by director Andrew Stanton).

You can find the latest specs for 'Finding Dory' linked from our Blu-ray Release Schedule, where it is indexed under November 15. 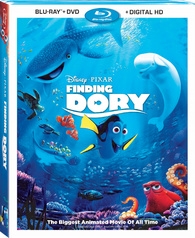 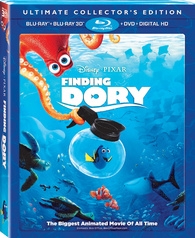