All 23 MCU films are coming to 4K Blu-ray in a massive box set.

As revealed in a new product listing on Best Buy, Disney is set to release The Infinity Saga Collector's Edition for 4K Ultra HD Blu-ray on November 15. The set is currently labeled as a Best Buy Exclusive and pre-orders are now live.

The numbered limited edition collection will include all 23 Marvel Cinematic Universe movies from Phase 1, Phase 2, and Phase 3 in individually packed art cases on 4K Blu-ray and Blu-ray. In addition, the collection will also include a letter from Marvel Studios President Kevin Feige, an exclusive lithograph by Matt Ferguson, and an exclusive bonus disc with never-before-seen deleted and extended scenes. 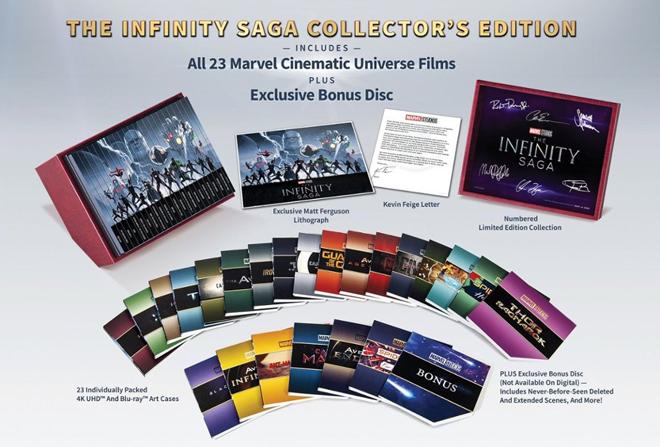 Full specs and supplements have not been detailed yet. Best Buy's current list price is $549.99 for the package.

Here's a full rundown of all the movies set to be included in the collection:

You can find the latest specs for The Infinity Saga Collector's Edition linked from our 4K Release Schedule, where it is indexed under November 15.