The force is strong with this teaser.

Disney and Lucasfilm have released the first official teaser trailer for Star Wars: The Last Jedi. The film is set to premiere on December 15.

Having taken her first steps into a larger world in Star Wars: The Force Awakens, Rey (Daisy Ridley) continues her epic journey with Finn (John Boyega), Poe (Oscar Isaac) and Luke Skywalker (Mark Hamill) in the next chapter of the saga.

In addition to the upcoming theatrical premiere of Episode VIII, Disney recently released the first Star Wars spin-off film, Rogue One: A Star Wars Story on Blu-ray and Digital HD.

In a time of conflict, a group of unlikely heroes band together on a mission to steal the plans to the Death Star, the Empire’s ultimate weapon of destruction. This key event in the Star Wars timeline brings together ordinary people who choose to do extraordinary things, and in doing so, become part of something greater than themselves.

Rogue One is directed by Gareth Edwards from a script by Chris Weitz and Tony Gilroy, and a story by John Knoll and Gary Whitta. The film stars Felicity Jones, Diego Luna, and Alan Tudyk. 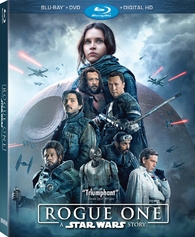