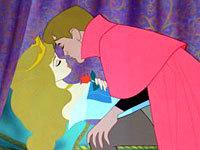 It's debut is still months away, but we've got an early peek at the box art for the highly-anticipated Blu-ray release of Disney's 'Sleeping Beauty.'

As previously reported, the studio has been touting 'Sleeping Beauty' as the kick-off high-def title in its Platinum Edition series, setting a street date of October 7 for the Blu-ray (the same day as a new standard-def re-issue).

Although the studio has not yet issued final details for 'Sleeping Beauty,' early specs for the two-disc set include newly-remastered 1080p/AVC MPEG-4 video and a PCM 7.1 Surround track (the studio's first).

'Sleeping Beauty' is also confirmed to be among the first titles from Disney to be fully BD-Live-enabled, featuring an exclusive "Virtual Castle" online destination, as well as the "Maleficent's Challenge" interactive game.

Finally, Disney has unveiled a peek at the Blu-ray cover for 'Sleeping Beauty,' which touts the two discs of content:

As previously announced, Disney has set the suggested retail price at $34.98 for the Blu-ray.

As always, you'll find the latest details for 'Sleeping Beauty' linked from our Blu-ray Release Schedule, where it's indexed under October 7.