A dozen acclaimed animated shorts will be getting the Blu-ray treatment in August.

In an early announcement to retailers, Disney/Buena Vista will be releasing 'Walt Disney Animation Studios Short Films Collection' on Blu-ray on August 18.

From Walt Disney Animation Studios comes an extraordinary new collection of award-winning and beloved short films featuring Disney's "Frozen Fever," starring Anna, Elsa, Olaf, Sven and Kristoff, and the Oscar-nominated "Lorenzo" (Best Animated Short, 2004). The Short Films Collection includes contemporary shorts starring classic characters, such as the groundbreaking 2013 Mickey Mouse cartoon, "Get A Horse!" And the holiday treat "Prep & Landing: Operation: Secret Santa," as well as celebrated Oscar winners "Paperman" (2012) and "Feast" (2014). Enjoy them together for the first time in this must-own collection with all-new extras including an inside look at the Disney Animation shorts, featuring introductions and interviews with the acclaimed filmmakers themselves.

Specs have yet to be revealed, but the Blu-ray Combo Pack will feature: Filmmaker Intros - The filmmakers behind the shorts share their journeys and introduce their films; @DisneyAnimation: A Short Story on Shorts - Continuing a legacy started in the earliest days of the Studio by Walt Disney, the Shorts Program is thriving today at the Animation Studios that bears his name, producing award-winning shorts that tell new stories and experiment with artistic and technical innovations. This latest chapter in the @DisneyAnimation series gives us an inside look at the process of developing and producing a short. Hosted by actor/comedian T.J. Miller (voice of "Fred," Big Hero 6), we will meet a few of the artists and filmmakers who make the shorts, and learn why they are such an important part of the fabric of Walt Disney Animation Studios. Round Table Panelists include Lauren MacMullan (Get A Horse!), Mike Gabriel (Lorenzo), Kristina Reed (Feast, Paperman), Stevie Wermers-Skelton and Kevin Deters (the team behind The Ballad of Nessie, Prep & Landing: Operation Secret Santa, How to Hook Up Your Home Theater); and Runaway Brain (1995) - DMA debut – Short film originally released in 2004 as part of the Walt Disney Treasures Collection: Mickey Mouse in Living Color, Vol. 2 DVD set. This short was nominated for an Academy Award® and screened during 1996 Cannes Film Festival.

You can find the latest specs for 'Walt Disney Animation Studios Short Films Collection' linked from our Blu-ray Release Schedule, where it is indexed under August 18. 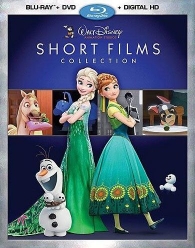