The action-packed MCU sequel is set to arrive on both formats this August.

According to an advertisement posted on the Marvel Cinematic Universe Facebook page (see below), Disney/Buena Vista is preparing to release Guardians of the Galaxy Vol. 2 on Blu-ray and 4K Ultra HD Blu-ray on August 22.

Peter Quill (Chris Pratt) and his crew of misfits search for his long-lost father in this sequel to the hit 2014 sci-fi adventure film. James Gunn returns to write and direct this installment of the Marvel Cinematic Universe, which also stars Zoe Saldana, Dave Bautista, Kurt Russell, Karen Gillan, and the voices of Bradley Cooper and Vin Diesel.

Specs and supplements have yet to be revealed, but the releases will include an exclusive music video with special guest stars, a gag reel, deleted scenes, and more.

UPDATE 7/12/17: Some fantastic news, folks, but not necessarily the news we were hoping for.

Guardians Vol.2 will 100% be available in 4K UHD with HDR in BOTH Dolby Vision & Dolby Atmos, BUT that dual Dolby combo is only going to be featured on the DIGITAL RELEASE via Disney Movies Anywhere (and their partners), and it will likely be retailer-dependent. This digital UHD version will be available August 8 and, per Disney, will also be available in HDR10 (not sure if its dual-HDR format or if you have to pick one based on the retailer).

Folks, I'm well aware of what Bill Hunt is reporting over at the Bits. Bill is a terrific guy and I wish (perhaps still even hope) he was somehow right, but...

Per DOLBY themselves, the Vol.2 4K Ultra HD Blu-ray will feature Dolby ATMOS, but NOT Dolby VISION. Yes, again per Dolby, HDR10 only.

This 4K UHD Blu-ray will come in at least three different versions:

Also, I read a RUMOR this morning that said the 3D version MAY include the IMAX aspect ratios. Stay tuned for confirmation.

And, we have reached out to Disney's PR agency to confirm the STREAMING retailers that will have Vol.2 in Dolby Vision or HDR10, as well as whether or not the Digital Copy code INCLUDED with the 4K Ultra HD Blu-ray will unlock a UHD streaming version (or HD/SD only).

Either way, more to come and we can't wait to get all of these reviewed for you. Cheers!

The Blu-ray included in the above Combo Packs or the Blu-ray Combo Pack (Blu-ray, DVD, Digital HD copy) will feature 7.1 DTS-HD Master Audio.

Blu-ray Bonus Materials include (but may vary by retailer):

The Making of Guardians of the Galaxy Vol.2 four-party behind-the-scenes documentary.

The Digital HD bonus materials include all of the above PLUS

Guardians of the Galaxy - Mission: Breakout! sneak peak at the new Disneyland ride (formerly The Twilight Zone Tower of Terror). 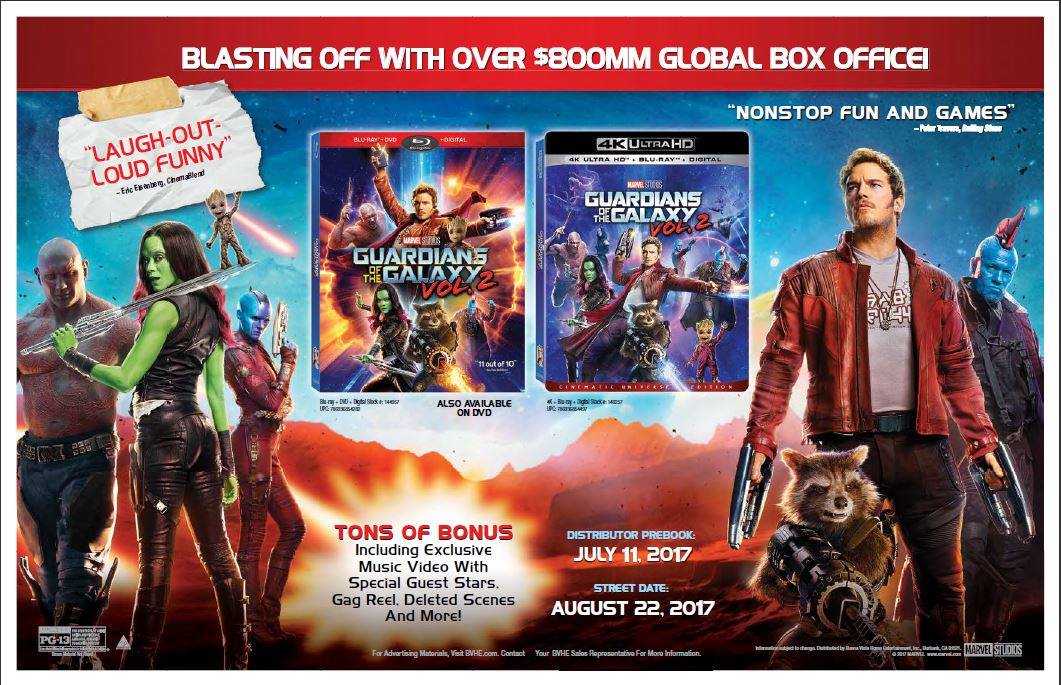