In an early announcement to retailers, Disney/Buena Vista is working on 'The Jungle Book - 3D: Collector's Edition' for Blu-ray 3D on November 15.

Get lost in the jungle with collectible packaging, spectacular 3D and new bonus features!

Beginning November. 15, the collector's edition of Disney's live-action epic adventure "The Jungle Book"—Jon Favreau's stunning reimagining of Walt Disney's animated classic—will be available to own just in time for the holidays. "The Jungle Book" Collector's Edition offers more than just the bare necessities with collectible packaging and a three-disc set containing the original theatrical release on Blu-ray 3D™, Blu-ray™, Digital HD and DVD, along with originally released bonus features and five never-before-seen extras.

The Collector's Edition provides fans with unprecedented access to "The Jungle Book" production through exciting new bonus features, including a performance of "The Bare Necessities" by Bill Murray (voice of Baloo) and jazz greats Dr. John and Kermit Ruffins, an inside look at the collaboration between director Jon Favreau and renowned composer Richard Sherman on a new version of the classic song "I Wan'na Be Like You," a fascinating feature exposing the visual effects magic behind some of the movie's most memorable moments, an early animatic of the scene where Mowgli meets Kaa, and a global celebration as Mowgli and Baloo sing "The Bare Necessities."

You can find the latest specs for 'The Jungle Book - 3D: Collector's Edition' linked from our Blu-ray Release Schedule, where it is indexed under November 15. 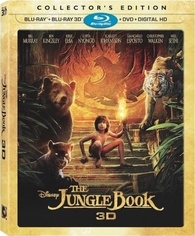