Steven Spielberg's 'The BFG' Blu-ray up for Pre-Order

The Big Friendly Giant is making his way to Blu-ray.

In an early announcement to retailers, Disney is preparing 'The BFG' for Blu-ray later this year.

The talents of three of the world’s greatest storytellers—Roald Dahl, Walt Disney and Steven Spielberg—finally unite to bring Dahl’s beloved classic "The BFG" to life. Directed by Spielberg, Disney’s 'The BFG' tells the imaginative story of a young girl and the Giant who introduces her to the wonders and perils of Giant Country.

You can find the latest specs for 'The BFG' linked from our Blu-ray Release Schedule, where it's indexed under PENDING. 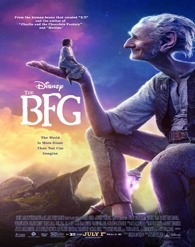 Discs mentioned in this article: (Click for specs and reviews)
The BFG (Blu-ray)