The Big Friendly Giant is making his way to Blu-ray this holiday season.

As previously reported, Disney is preparing 'The BFG' for Blu-ray later this year, and now the date has been set for December 6.

The talents of three of the world’s greatest storytellers—Roald Dahl, Walt Disney and Steven Spielberg—finally unite to bring Dahl’s beloved classic "The BFG" to life. Directed by Spielberg, Disney’s 'The BFG' tells the imaginative story of a young girl and the Giant who introduces her to the wonders and perils of Giant Country.

The combo pack will feature 1080p video, a lossless 7.1 soundtrack, and supplements include: Bringing "The BFG" to Life – Ruby Barnhill (Sophie) hosts a phizz-whizzing journey through the making of "The BFG." This behind-the-scenes documentary details the film's progression through interviews with Roald Dahl's daughter Lucy Dahl, screenwriter Melissa Mathison, executive producers Kathleen Kennedy, Frank Marshall and Kristie Macosko Krieger, and numerous members of the talented cast and crew; The Big Friendly Giant and Me – Sophie wasn't the first "bean" in Giant Country—many illustrations were created as if drawn by a little boy who was there long before Sophie. This charming, in-world short will bring the drawings to life with animation and narration, recounting the friendship and the dreams shared between the boy and the Big Friendly Giant; Gobblefunk: The Wonderful Words of The BFG – A whoopsey-splunkers tutorial on the meaning of the gloriumptious gobblefunk in "The BFG"; Giants 101 – Jemaine Clement (Fleshlumpeater) and Bill Hader (Bloodbottler) introduce us to the loathsome giants in "The BFG," along with movement choreographer/motion capture performer Terry Notary, who collaborated with the actors and Director Steven Spielberg prior to filming to develop their movements and character traits; and Melissa Mathison: A Tribute – An homage to Melissa Mathison, the extraordinary, Oscar-nominated screenwriter of "The BFG" and "E.T.," whose talent and heart were as immense as the giants in "The BFG."

You can find the latest specs for 'The BFG' linked from our Blu-ray Release Schedule, where it's indexed under December 6. 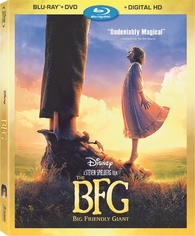