J.J. Abrams' Star Wars: Episode VII looks to be coming in April. Blu-ray pre-orders are now up at Amazon!

As previously reported, Disney/Buena Vista will be releasing 'Star Wars: The Force Awakens' on Blu-ray, and now Amazon says the release date will be April 5.

You can find the latest specs for 'Star Wars: The Force Awakens' linked from our Blu-ray Release Schedule, where it is indexed under April 5. 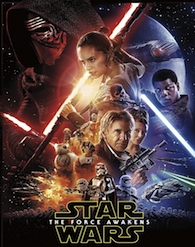