The inspirational drama based on a true story will arrive on Blu-ray in January.

In an early announcement to retailers, Disney is preparing 'Queen of Katwe' for Blu-ray on January 31.

'Queen of Katwe' is based on the vibrant true story of a young girl (Madina Nalwanga) from the streets of Uganda whose world changes when she is introduced to the game of chess, and, as a result of the support she receives from her family and community, is instilled with the confidence and determination she needs to pursue her dream of becoming an international chess champion. It is a remarkable story of perseverance against all odds that will leave viewers feeling humbled and inspired. According to director Mira Nair, "The triumph of the human spirit is not to weep for what we don't have but to focus on what we do have and allow that to take us to a place we never imagined possible."

- Queen Of Katwe: Their Story – Discover the stories behind the people who came together to bring the film to life, and how they reflect the vibrant community, culture and spirit it celebrates.
- A Fork, A Spoon & A Knight – Director Mira Nair's short film about Robert Katende, a boy who grows up to transform a Ugandan city into a globally renowned chess sanctuary.
- In The Studio With Alicia Keys – Go behind-the-scenes with Alicia Keys for an inspiring look at the song's recording.
- Alicia Keys "Back To Life" Lyric Video – Sing along with on-screen lyrics.
- Young Cardamom & HAB "#1 Spice" Music Video – The Ugandan hip-hop duo bring the flavor in a music video directed by Mira Nair.
- Audio Commentary – With Director Mira Nair.
- Deleted Scenes (8) – With Introductions by Director Mira Nair.

You can find the latest specs for 'Queen of Katwe' linked from our Blu-ray Release Schedule, where it's indexed under January 31. 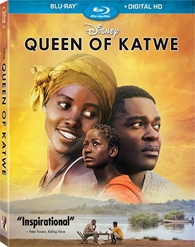 Discs mentioned in this article: (Click for specs and reviews)
Queen of Katwe (Blu-ray)