The action-packed superhero showdown is up for Blu-ray preorders at Amazon.

In an early announcement to retailers, Disney/Buena Vista will be releasing 'Captain America: Civil War' on Blu-ray and Blu-ray 3D later this year.

After another incident involving the Avengers results in collateral damage, political pressure mounts to install a system of accountability, headed by a governing body to oversee and direct the team. The new status quo fractures the Avengers, resulting in two camps, one led by Steve Rogers and his desire for the Avengers to remain free to defend humanity without government interference, and the other following Tony Stark's surprising decision to support government oversight and accountability.

You can find the latest specs for 'Captain America: Civil War' linked from our Blu-ray Release Schedule, where they are indexed under PENDING. 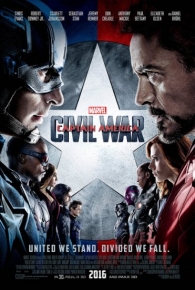