In an early announcement to retailers, Disney/Buena Vista is preparing to bring 'Cinderella' to Blu-ray on September 15.

Celebrate Disney’s “Cinderella,” a modern classic that shines with beauty, imagination…and magic! Despite being mistreated by her stepmother (Cate Blanchett) and stepsisters, a spirited Ella (Lily James) resolves to take charge of her fate. Add a royal ball, a Fairy Godmother (Helena Bonham-Carter) and a glass slipper, and suddenly – magic becomes reality!

The Blu-ray/DVD/Digital Copy combo pack will feature 1080p video, a lossless 7.1 soundtrack, and supplements include: A Fairy Tale Comes to Life - Filmmakers and cast reflect on Cinderella’s enduring power, and the joys and challenges of bringing this iconic tale to life; Costume Test Fun - See the work of Academy Award-winning® Costume Designer Sandy Powell (The Aviator, 2004) and share some lighthearted moments with the cast; Staging The Ball - You’re invited behind the scenes for the making of the Palace Ball sequence, including its spectacular set, stunning costumes and more. It’s a lavish and massive undertaking…and a magical day on set; Alternate Opening: Ella's Childhood - View moments from Ella’s idyllic childhood that do not appear in the movie. With an introduction by Director Kenneth Branagh; Ella's Furry Friends - Discover how the movie’s animal stars honed their memorable performances; and Frozen Fever - It’s Anna’s birthday, and Elsa and Kristoff are determined to give her the best celebration ever – but when Elsa catches a cold, her powers may put more than just the party at risk.

You can find the latest specs for 'Cinderella' linked from our Blu-ray Release Schedule, where it is indexed under September 15. 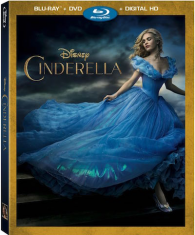