Disney's 'The Finest Hours' Blu-ray Up for Pre-Order

The drama starring Chris Pine, Casey Affleck, and Ben Foster is coming to the rescue on Blu-ray later this year.

In an early announcement to retailers, Disney is preparing 'The Finest Hours' for Blu-ray in 2016.

In February of 1952, one of the worst storms to ever hit the East Coast struck New England, damaging an oil tanker off the coast of Cape Cod and literally ripping it in half. On a small lifeboat faced with frigid temperatures and 70-foot high waves, four members of the Coast Guard set out to rescue the more than 30 stranded sailors trapped aboard the rapidly-sinking vessel.

You can find the latest specs for 'The Finest Hours' linked from our Blu-ray Release Schedule, where it's indexed under PENDING. 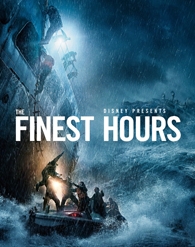 Discs mentioned in this article: (Click for specs and reviews)
The Finest Hours (Blu-ray)