The classic animated film will return to Blu-ray in June.

In an early announcement to retailers, Disney is preparing Bambi: The Signature Collection for Blu-ray on June 6. In addition, a Best Buy Exclusive Edition with a Lenticular Slipcover will also be available that same day.

A timeless classic that has been loved for generations, BAMBI now joins the Walt Disney Signature Collection. In this life-changing adventure, Bambi sets off with his best friends Thumper and Flower to explore the wonders and challenges of the woods -- and fulfill his destiny as prince of the forest. Full of humor and heart, and featuring awe-inspiring animation, BAMBI remains a family favorite, ready to delight a whole new generation. In striving for realism, the artists heard lectures from animal experts, made field trips to the Los Angeles Zoo, watched specially filmed nature footage shot in the forests of Maine, and even studied the movements of two fawns that were donated to the Studio. "Fellas, this stuff is pure gold," Walt Disney told the animators. The story of the little deer coming of age has endured, and today, BAMBI is universally regarded as one of Walt Disney's most charming films.

The Blu-ray will feature 1080p video, a DTS-HD soundtrack, and supplements will include:

You can find the latest specs for Bambi: The Signature Collection linked from our Blu-ray Release Schedule, where it's indexed under June 6. 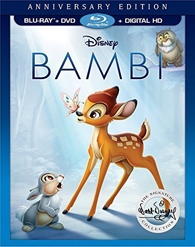