Woody and Buzz will return to Blu-ray in November, and you can pre-order the disc here.

In an early announcement to retailers, Disney is preparing 'Toy Story That Time Forgot' for Blu-ray on November 3.

Disney-Pixar proudly present a hilarious new animated 'Toy Story' adventure. During one of Bonnie's post-Christmas playdates, the 'Toy Story' crew find themselves in uncharted territory when the coolest set of action figures ever turn out to be dangerously delusional. It's all up to Trixie the triceratops if the gang hopes to ever return to Bonnie's room. 'Toy Story That Time Forgot' is an unforgettable tale packed with family fun!

Specs have not been detailed yet, but supplements will include: Reptillus!; Commentary; Toy Story Goes to Comic-Con; My Unexpected Friend; Battlesaurs Animated Opening; and Deleted Scenes with Intros & Outros.

You can find the latest specs for 'Toy Story That Time Forgot' linked from our Blu-ray Release Schedule, where it's indexed under November 3. 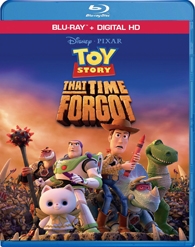 Discs mentioned in this article: (Click for specs and reviews)
Toy Story That Time Forgot (Blu-ray)