The nature documentary is swinging toward Blu-ray in September. You can pre-order the movie now.

In an early announcement to retailers, Disney is preparing 'Monkey Kingdom' for Blu-ray on September 15.

Life is an adventure for Maya, the clever and resourceful blonde-bobbed monkey in 'Monkey Kingdom.' Set among ancient ruins in the storied jungles of South Asia, Maya's world is forever changed when she welcomes her son, Kip, into her complicated extended family. Like all families, Maya's family has more than its share of colorful personalities, and she's determined to give her son a leg up on the social ladder. When their longtime home at Castle Rock is taken over by powerful neighboring monkeys, Maya's whole family is forced to relocate, and she uses her street smarts and ingenuity to lead them to untapped resources amidst strange new creatures and unsettling surroundings. Ultimately, they will all have to work together to reclaim Castle Rock, where Maya can hopefully realize her dreams for her son's future.

The Blu-ray/DVD/Digital HD combo pack will feature 1080p video, a DTS-HD MA 5.1 soundtrack, and supplements will include: A Special Thank You from Disneynature; Tales From The Kingdom; On The Set of Monkey Kingdom with Jane Goodall and Wolfgang Dittus; Disneynature Monkey Kingdom: The Conservation Story; and It's Our World Music Video Performed by Jacquie Lee.

You can find the latest specs for 'Monkey Kingdom' linked from our Blu-ray Release Schedule, where it's indexed under September 15. 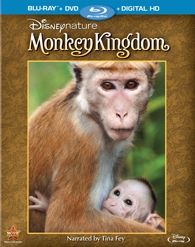 Discs mentioned in this article: (Click for specs and reviews)
Monkey Kingdom (Blu-ray)