The biggest superhero movie of all-time arrives on home video in September!

As previously reported, Disney/Buena Vista is working on 'Captain America: Civil War' for Blu-ray and Blu-ray 3D, and now the official street date is September 13.

The most explosive clash to ever rock the Marvel Cinematic Universe ignites a firestorm of conflict in the game-changing epic, Captain America: Civil War. In the wake of collateral damage, government pressure to rein in the Avengers drives a deep wedge between Captain America (Chris Evans) and Iron Man (Robert Downey Jr.), causing a catastrophic rift that escalates into an all-out feud. Against a backdrop of divided loyalties, their fellow Avengers must deal with the fallout. Pick a side in this spectacular adventure, packed with mind-blowing action, suspense and exclusive bonus content!

The releases will feature 1080p video, a lossless 7.1 soundtrack, and supplements include: an inside look at the evolution of lead characters Steve Rogers and Tony Stark, a behind-the-scenes exclusive on the making of Marvel’s “Captain America: Civil War,” never-before-seen deleted scenes and hilarious outtakes. Plus, home audiences can learn more about the latest additions to the MCU and get an exclusive, first look at Marvel’s “Doctor Strange,” starring Benedict Cumberbatch.

You can find the latest specs for 'Captain America: Civil War' linked from our Blu-ray Release Schedule, where they are indexed under September 13. 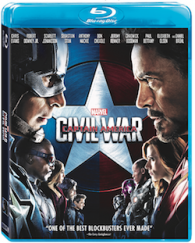 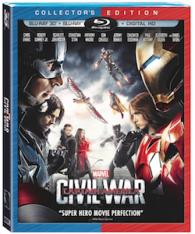