Bill Condon's 'Beauty and the Beast' Announced for Blu-ray

In an early announcement to retailers, Disney/Buena Vista is working on 'Beauty and the Beast' for Blu-ray on June 6.

Disney's Beauty and the Beast is a live-action re-telling of the studio's animated classic which refashions the classic characters from the tale as old as time for a contemporary audience, staying true to the original music while updating the score with several new songs. "Beauty and the Beast" is the fantastic journey of Belle, a bright, beautiful and independent young woman who is taken prisoner by a beast in his castle. Despite her fears, she befriends the castle's enchanted staff and learns to look beyond the Beast's hideous exterior and realize the kind heart and soul of the true Prince within.

Specs have yet to be revealed, but supplements include: Enchanted Table Read – Join the cast for the movie's elaborately staged table read, complete with singing and dancing to live music, set pieces and more; A Beauty of a Tale – Explore the process of transforming a beloved animated film into a new live-action classic; The Women Behind Beauty and the Beast – Emma Watson introduces several of the talented women in all aspects of production who helped bring this enchanted tale to life; Making a Moment with Celine Dion – Celine Dion shares what it's like to sing "How Does a Moment Last Forever" – and be a part of the legacy of Beauty and the Beast; From Song to Screen: Making the Musical Sequences – See what goes into making some of the best-known moments from Beauty and the Beast; Deleted Scenes with Introduction by Director Bill Condon; Extended Song: "Days in the Sun" – Learn more about Beast's childhood in an alternate version of this beautiful song, introduced by director Bill Condon; "Beauty and the Beast" Music Video – Award-winning artists Ariana Grande and John Legend perform a moving version of this iconic song; and Making the Music Video – Go on set to capture the magic as it happens in Ariana Grande and John Legend's "Beauty and the Beast" music video."Beauty and the Beast"Disney Song Selection – Jump directly to all your favorite songs and sing along with the movie.

You can find the latest specs for 'Beauty and the Beast' linked from our Blu-ray Release Schedule, where it is indexed under June 6. 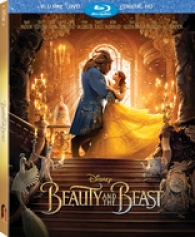