The sequel to Tim Burton's fantasy-adventure arrives on Blu-ray in October.

As previously reported, Disney will be releasing 'Alice Through the Looking Glass' on Blu-ray later this year, and now the date has been set for October 18.

In "Alice Through the Looking Glass," the all-star cast from the 2010 blockbuster is back with Johnny Depp as the Mad Hatter who's desperately searching for his family; Anne Hathaway as Mirana, the kind, mild-mannered White Queen; Helena Bonham Carter as Iracebeth, the short-tempered, big-headed Red Queen; and Mia Wasikowska as Alice, the heroine at the heart of the story. Sacha Baron Cohen joins the ensemble as Time, a magical being that is part human, part clock, and the late Alan Rickman—to whom the film is dedicated—is the voice of Absolem, the blue Monarch butterfly who metamorphosed from the blue caterpillar "Alice in Wonderland."

The Blu-ray combo pack will feature 1080p video, a lossless 7.1 soundtrack, and supplements include: A Stitch in Time: Costuming Wonderland – Three-time Oscar®-winning costume designer Colleen Atwood ("Alice in Wonderland," "Memoirs of a Geisha") explains how costuming helps shape the curious characters of Underland and reveals hidden Easter Eggs within the cast's ornate outfits; Music Video: "Just Like Fire" by P!nk – "Watch this madness, colorful charade" in P!nk's music video for "Just Like Fire," the hit song featured in "Alice Through the Looking Glass" that powered to the top 10 on Billboard's Hot 100; Behind the Music Video – Go on set with P!nk for production of her "Just Like Fire" music video, featuring fantastical imagery, aerial stunts, Underland character cameos, and guest appearances by P!nk's family; Behind The Looking Glass – Jump back and forth through time during this in-depth look into the making of "Alice Through the Looking Glass," hosted by director James Bobin; Time On… – Delight in this discussion with the unpredictable and witty Sacha Baron Cohen who plays Time, the keeper of the Chronosphere, a metallic sphere that powers all time; Alice Goes Through the Looking Glass: A Scene Peeler – View a side-by-side comparison of raw production footage and final scenes, as Alice enters Underland through a magical looking glass; Alice Goes Through Time's Castle: A Scene Peeler – View raw production footage alongside final scenes, as Alice enters Time's castle of eternity; Characters of Underland – Get to know the quirky and colorful supporting characters in Underland, such as the tubby twins known as the Tweedles (Matt Lucas) and Absolem (Alan Rickman), the blue caterpillar turned blue Monarch butterfly; Filmmaker Audio Commentary by James Bobin – Director James Bobin delivers scene-by-scene insight into the creation of "Alice Through the Looking Glass."; and Deleted Scenes with Director Commentary – Bobin introduces five never-before-seen scenes that didn't make the final cut of Disney's spectacular adventure.

You can find the latest specs for 'Alice Through the Looking Glass' linked from our Blu-ray Release Schedule, where it is indexed under October 18. 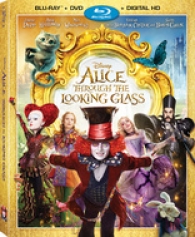