ABC's 'Once Upon a Time: The Complete Fourth Season' Dated and Detailed for Blu-ray

The fourth season of the fantasy series arrives on Blu-ray in August.

In an early announcement to retailers, Disney/Buena Vista will be releasing 'Once Upon a Time: The Complete Fourth Season' on Blu-ray on August 18.

Love. As seductive and dangerous as magic, this potent, unpredictable force proves to be the ultimate weapon in the epic battle between good and evil in ABC's Once Upon a Time: The Complete Fourth Season. Soon after Emma (Jennifer Morrison) and Hook (Colin O'Donoghue) unwittingly bring Elsa of Arendelle (Georgina Haig) to Storybrooke, they encounter the mysterious Snow Queen, whose relentless obsession with both Emma and Elsa has chilling consequences. Meanwhile, it appears Regina (Lana Parrilla) has at last found true love with Robin Hood (Tom Ellis). But how will she react when her happy ending is thwarted yet again by a maddening twist of fate?

Then, a banished Rumplestiltskin (Robert Carlyle) enlists the Queens of Darkness - Maleficent (Kristin Bauer van Straten), Ursula (Merrin Dungey), and Cruella De Vil (Victoria Smurfit) - in an insidious scheme to rewrite their own endings and corrupt the Savior by turning her newly blissful heart pitch-black.

The 5-disc set will feature 1080p video, lossless 5.1 audio, and supplements include: Defrosting Frozen - An arctic blast hit Storybrooke this year as the characters from Frozen and The Snow Queen took over the first half of the season; Behind the Magic Tour - Join hosts Josh Dallas and Ginnifer Goodwin as they take you on an exclusive back stage tour on the stages of Once Upon A Time; Three Who Stayed - Meet three residents of Storybrooke who decided to stay after the ice wall came down; The Fairest Bloopers of Them All; Deleted Scenes; and Audio Commentaries.

You can find the latest specs for 'Once Upon a Time: The Complete Fourth Season' linked from our Blu-ray Release Schedule, where it is indexed under August 18. 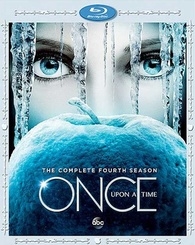