The next wave of 22 episodes from the hit animated series arrives on Blu-ray in August.

In an early announcement to retailers, Disney and LucasFilm will be bringing 'Star Wars Rebels: Complete Season Two' to Blu-ray on August 30.

Amid growing Imperial oppression on Lothal, the rebels are forced to seek out new allies throughout the galaxy and additional resources to sustain their fight against the Empire. With the help of Ahsoka Tano, the crew of the Ghost bands together with a secret rebel cell and ex-soldiers from the Clone Wars to join a fledgling alliance determined to restore peace and freedom to the galaxy.

As Ezra continues his journey to become a Jedi under Kanan’s guidance, the threat of the dark side looms large over the fate of the growing rebellion. Darth Vader himself will dispatch new Inquisitors to snuff any spark of resistance, setting the stage for a climactic showdown in which past lives will be revealed, terrible truths will be discovered, and the lives of our heroes will be changed forever.

The 4-disc set will feature 1080p video and supplements include: Connecting the Galaxy: Rebels Season Two – Uncover hidden references, easter eggs and connections to the Star Wars universe found throughout the season; Rebel Recons – Blast off with 20 fun, fast-paced episode recons, featuring behind-the-scenes footage, interviews with cast and crew, and more; and From Apprentice to Adversary: Vader vs. Ahsoka (Exclusive to Blu-ray) – Executive Producer Dave Filoni reflects on the climactic ending of the season, when Ahsoka Tano finally confronts Darth Vader in a long-awaited, fierce and epic lightsaber battle.

You can find the latest specs for 'Star Wars Rebels: Complete Season Two' linked from our Blu-ray Release Schedule, where it is indexed under August 30. 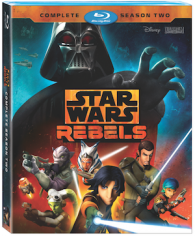