Marvel's 'Agent Carter: The Complete First Season' Up For Pre-Order

The first batch of episodes of the hit series starring Hayley Atwell will target Blu-ray this fall.

In an early announcement to retailers, Disney/Buena Vista says 'Agent Carter: The Complete First Season' will hit Blu-ray on September 18.

In this action-packed series, Peggy Carter becomes a S.S.R. agent during WW2 after her boyfriend, Steve Rogers (Captain America) is feared dead in an explosion.

You can find the latest specs for 'Agent Carter: The Complete First Season' linked from our Blu-ray Release Schedule, where it is indexed under September 18. 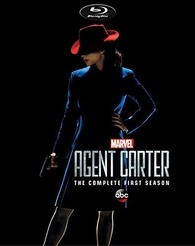