'Spirited Away' & 'The Cat Returns' Blu-rays Dated and Detailed

Both Studio Ghibli titles will be getting the Blu-ray treatment in June.

As previously reported, Disney/Buena Vista will be releasing 'Spirited Away' and 'The Cat Returns' on Blu-ray sometime later this year, and now the date has been set for June 16.

'Spirited Away' -- In the middle of her family's move to the suburbs, a sullen 10-year-old girl wanders into a world ruled by gods, witches, and monsters; where humans are changed into animals; and a bathhouse for these creatures.

'The Cat Returns' -- From the creators of the Academy Award-winning SPIRITED AWAY comes the visually stunning THE CAT RETURNS. Haru, a schoolgirl bored by her ordinary routine, saves the life of an unusual cat, and suddenly her world is transformed beyond anything she ever imagined. The Cat King rewards her good deed with a flurry of presents, including a very shocking proposal of marriage to his son! Haru then embarks on an unexpected journey to the Kingdom of Cats, where her eyes are opened to a whole other world and her destiny is uncertain. To change her fate, she'll need to learn to believe in herself and, in the process, she will learn to appreciate her everyday life. Featuring the sensational voice talents of Anne Hathaway, Cary Elwes, Peter Boyle and Elliott Gould, THE CAT RETURNS is a magical animated adventure that will delight and inspire everyone.

The Blu-ray/DVD Combo Pack will feature 1080p video, a lossless 5.1 soundtrack, and supplements include: Original Japanese Storyboards, Original Japanese Trailers & TV Spots, The Making of The Cat Returns, and Behind The Microphone.

You can find the latest specs for 'Spirited Away' and 'The Cat Returns' linked from our Blu-ray Release Schedule, where they are indexed under June 16. 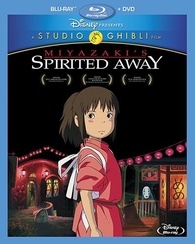 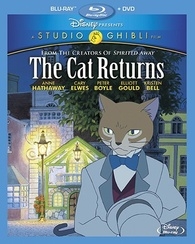