The 1961 film getting the Diamond Edition Blu-ray treatment on February 10 can now be pre-ordered at Amazon.

As previously reported, Disney/Buena Vista will be releasing '101 Dalmatians: Diamond Edition' on Blu-ray on February 10.

Pick your favorite spot to watch—anytime and anywhere—and get ready for a fun-filled adventure with the Diamond Edition of 101 Dalmatians! Pongo, Perdita and their super-adorable puppies are in for thrills, hilarious spills and an epic action-packed adventure when they face off with Cruella De Vil, Disney’s most fabulously outrageous villainess. When Cruella dognaps all of the Dalmatian puppies in London, brave animal heroes launch a daring plan to save all puppies from Cruella’s clutches! Unleash all the excitement and suspense of Disney’s 101 Dalmatians, a beloved classic you’ll want to share with your family again and again!

The Blu-ray will feature 1080p video, a lossless 7.1 soundtrack, and supplements will include: All New Short – The Further Adventures of Thunderbolt; Walt Disney Presents “The Best Doggoned Dog in the World” (1961 Version); Lucky Dogs; DisneyView; Dalmatians 101: Hosted by Cameron Boyce (Disney Channel’s “The Descendants”); plus a Selection of Classic Bonus Features.

You can find the latest specs for '101 Dalmatians: Diamond Edition' linked from our Blu-ray Release Schedule, where it's indexed under February 10. 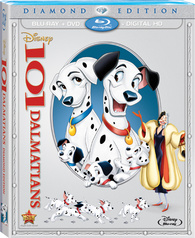