The acclaimed film starring Tom Hanks is headed for Blu-ray in February.

In an early announcement to retailers, Disney/Buena Vista is set to release 'Bridge of Spies' on Blu-ray on February 2.

A dramatic thriller set against the backdrop of a series of historic events, DreamWorks Pictures/Fox 2000 Pictures' Bridge of Spies tells the story of James Donovan (Tom Hanks), a Brooklyn lawyer who finds himself thrust into the center of the Cold War when the CIA sends him on the near-impossible task to negotiate the release of a captured American U-2 pilot. Screenwriters Matt Charman and Ethan Coen & Joel Coen have woven this remarkable experience in Donovan's life into a story inspired by true events that captures the essence of a man who risked everything and vividly brings his personal journey to life.

Specs have yet to be revealed, but supplements include: "Berlin 1961: Re-creating The Divide" - Experience the Berlin Wall, Checkpoint Charlie and Frederic Pryor's arrest through a mix of archival imagery, behind-the-scenes moments and firsthand accounts; "U-2 Spy Plane" - Witness the making of the spectacular U-2 plane crash sequence with archival voiceover by U-2 pilot Francis Gary Powers, and a cameo by his son, Francis Gary Powers, Jr.; "Spy Swap: Looking Back On The Final Act" - Relive a page of Cold War history on the Glienicke Bridge while shooting the historic exchange of Soviet spy Rudolf Abel and U-2 pilot Francis Gary Powers; and "A Case Of The Cold War: Bridge of Spies" - Delve deeper into the film's characters and the real-life people on whom they're based, and discover why the history behind "Bridge Of Spies" still resonates today.

You can find the latest specs for 'Bridge of Spies' linked from our Blu-ray Release Schedule, where it is indexed under February 2. 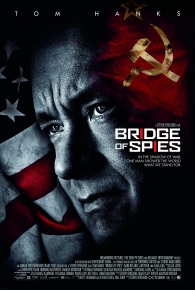