The Disney sports drama is racing toward Blu-ray in June, and you can pre-order the movie now.

In an early announcement to retailers, Disney/Buena Vista is preparing 'McFarland, USA' for Blu-ray on June 2.

In the tradition of Disney sports movies comes 'McFarland, USA,' a story of underdogs triumphing over tremendous obstacles. This heartwarming drama follows novice runners who strive to build a cross-country team under Coach Jim White (Kevin Costner) in their predominantly Latino high school. Everyone has a lot to learn about each other, but when Coach realizes the boys' exceptional running ability, things change. Beyond their talent, it's the power of family, commitment to each other and work ethic that transform them into champions — helping them achieve their own American dream.

You can find the latest specs for 'McFarland, USA' linked from our Blu-ray Release Schedule, where it's indexed under June 2. 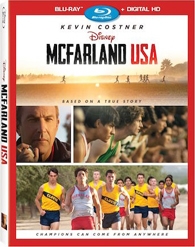 Discs mentioned in this article: (Click for specs and reviews)
McFarland, USA (Blu-ray)